As members of the class Amphibia, frogs may live some of their adult lives on land, but they must return to water to reproduce.  Being the first land chordates, they needed to develop or evolve different characteristics than those of the chordates that lived in the water.  Here are some of those adaptations and how they were an advantage to terrestrial dwelling chordates:

1.  legs:  enabled the amphibian to move about the land much easier than the lobe-finned fish ancestors.

2.  strong skeleton made of bone:  without the water to provide some buoyancy, the amphibian needed a stronger frame to hold up its body while on land.

3.  Lungs: lungs are necessary for living on land to extract oxygen from the air.  The amphibian lungs are not very efficient so they also use their moist skin as an oxygen exchanger while swimming in water.

Here are some other features of the amphibians:

Eggs are laid and fertilized in water. On the outside of the frog’s head are two external nares, or nostrils; two tympanic membranes, or eardrums, which the frog uses to hear with; and two eyes, each of which has three lids. The third lid, called the nictitating membrane, is transparent, it is used to protect the eye from debri and prevent the eye from drying out when on land.  Unlike the fish, the placement of the external nares and eyes are on the top of the head instead of the sides and front of the head like the fish.  This helps the frog keep its body in the water, while still being able to keep its eyes and nares above the water line.  This advantage helps the frog to be able look for predators as well as keep an eye out for food all while being mostly submerged.

You will notice that one of the most obvious features of the frog are its back legs.  These legs and feet are well adapted for living both in the water and on land.  The strong bone structure and muscular legs are an advantage on land as they can use them to jump quickly away from predators or for catching their own prey.  You will also notice that the feet are webbed (webbed toes).  This helps the frog to be an efficient swimmer while in the water.

Inside the mouth are two internal nares, or openings into the nostrils; two vomerine teeth in the middle of the roof of the mouth; and two maxillary teeth at the sides of the mouth.  These "teeth" are designed to hold their prey while they swallow it whole.  They are not intended for chewing.  Also inside the mouth behind the tongue is the pharynx, or throat.  The tongue of the frog is a bit unusual.  Instead of being attached at the rear, the frog tongue is attached at the front.  This allows the frog to extend the tongue and retrieve food.  See the animated photo below and watch how the tongue moves during the eating phase.  The tongue of your specimen, however, is not as pliable.  This is due to the fact that it is a muscle and that in the "dead" state of your frog, it is rather stiff.

If you are observant, you will notice that the ventral or belly side of the frog is lighter in color than the top or dorsal side.  This coloring scheme is known as counter-shading.  Counter-shading allows for camouflage from both above and below viewpoints.  From above, the dark colors blend in with the surrounding environment.  From below, the light coloring blends in with the light from the sun above.  This type of coloration is used by many aquatic animals, as it is quite effective in allowing the animal to blend in.

In the pharynx, there are several openings: one is the glottis which opens up into the esophagus, the tube into which food is swallowed; two the larynx, or voice box, air will travel over the larynx and the frog is able to make vocalizations; and three into the Eustachian tubes, which connect the pharynx to the tympanum or tympanic membrane. The digestive system consists of the organs of the digestive tract, or food tube, and the digestive glands. From the esophagus, swallowed food moves into the stomach (stores and churns the food and begins chemical digestion) and then into the small intestine (main organ of digestion, this is where the nutrients are absorbed into the blood stream). Bile is a digestive juice made by the liver (also involved in detoxifying blood and producing proteins needed for digestion) and stored in the gallbladder. Bile flows into a tube called the common bile duct, into which pancreatic juice, a digestive juice from the pancreas, also flows. The contents of the common bile duct flow into the small intestine, where most of the digestion and absorption of food into the bloodstream takes place.

Indigestible materials pass through the large intestine (water is reabsorbed from the undigested food in the large intestine) and then into the cloaca, the common exit chamber of the digestive, excretory, and reproductive systems. The respiratory system consists of the nostrils and the larynx, which opens into two lungs, hollow sacs with thin walls. The walls of the lungs are filled with capillaries, which are microscopic blood vessels through which materials pass into and out of the blood. The circulatory system consists of the heart, blood vessels, and blood. The heart has two receiving chambers, or atria, and one sending chamber, or ventricle. Blood is carried to the heart in vessels called veins. Veins from different parts of the body enter the right and left atria. Blood from both atria goes into the ventricle and then is pumped into the arteries, which are blood vessels that carry blood away from the heart.  The spleen is the organ that serves as a reservoir for blood and it also functions to remove old, worn-out blood cells from the circulatory system.

The urinary system consists of the frog’s kidneys, ureters, bladder, and cloaca. The kidneys are organs that filter the blood of impurities. Connected to each kidney is a ureter, a tube through which urine passes into the urinary bladder, a sac that stores urine until it passes out of the body through the cloaca. The organs of the male reproductive system are the testes, sperm ducts, and cloaca. Those of the female system are the ovaries, oviducts, uteri, and cloaca. The testes produce sperm, or male sex cells, which move through sperm ducts, tubes that carry sperm into the cloaca, from which the sperm move outside the body. The ovaries produce eggs, or female sex cells, which move through oviducts into the uteri, then through the cloaca outside the body.

The central nervous system of the frog consists of  the brain, which is enclosed in the skull, and the spinal cord, which is enclosed in the backbone. Spinal Nerves branch out from the spinal cord and can be visible in the abdominal cavity of the frog if you look carefully. The frog’s skeletal and muscular systems consist of its framework of bones and joints, to which nearly all the voluntary muscles of the body  are attached. Voluntary muscles, which are those over which the frog has control, occur in pairs of flexors and extensors. When a flexor of a leg or other body part contracts, that  part is bent. When the extensor of that body part contracts, the part straightens.  It is the nervous system that controls many of the frogs senses and behaviors.  Here are a few of the structures involved:

Describe the appearance of various organs found in the frog.
• Name the organs that make up various systems of the frog.

Purpose:
In this lab, you will dissect a frog in order to observe the external and internal structures of frog anatomy.  Frog dissection has been a staple of biology classes for many, many years.  The reason for this includes: 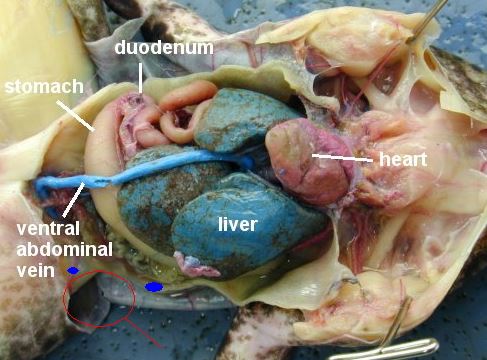